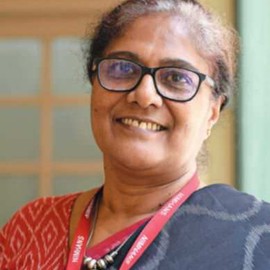 Professor of Neurophysiology & Officer In charge, Centre for Consciousness Studies

Deciphering the underlying scientific basis of consciousness is one of the greatest challenges confronted by neuroscientists, philosophers, psychologists, mathematicians, quantum physicists, computer scientists, evolutionary biologists and others. India has a long tradition of exploring this concept from philosophical and cultural perspectives. However, deciphering consciousness using an integrated perspective by using the insights from modern neuroscience and our ancient philosophical and cultural traditions has not been attempted. NIMHANS by virtue of its indisputable competence in neuroscience and mind science will be a unique and most preferred institute to establish such a multi-disciplinary center for consciousness studies.

Renowned scientists and visionaries of yesteryears of NIMHANS, late Prof. T. Desiraju, late Prof. R.M. Verma and late Prof. R.L.Kapur, had recognized the importance of initiating and perpetuating studies to explore the neural basis of brain-mind-self and consciousness. In recognition of the efforts of these eminent scientists, Indian Council of Medical Research (ICMR) funded a project on consciousness studies way back in 1980 to Prof. T. Desiraju, Prof & Head, Department of Neurophysiology. Prof. Desiraju and his team of scientists including Dr. B.L. Meti, Dr. B.R. Kanchan and Dr. Shirley Telles have undertaken studies especially on the neurophysiology of Yoga and Meditation as well as on the Yoga interventions in psychosomatic disorders have made significant impact in the scientific community across globe.

Imbibing inspiration from earlier studies, the present research team of NIMHANS under the leadership of Prof. Bindu M. Kutty from the Department of Neurophysiology took up consciousness studies in collaboration with research scientists from other institutions (NIAS, IISc and Navanalanda Mahavihara for Buddhist studies) as well as with faculty from NIMHANS. The team has initiated preliminary studies on neural mechanisms of meditation, meditation and cognition, meditation and sleep organization, meditation and well being, neurobiology of Schizophrenia , anxiety disorders and neurodegenerative disorders as a way to understand the neural basis of consciousness. Such intensive research studies over the last 20 years spanning several disciplines of cognition and consciousness have helped the team to acquire core competence and expertise. The research team at NIMHANS has developed expertise to explore the functions of brain and mind using tools such as EEG, ERP, MRI, fMRI and other psychometric scales.

Though the team has been able to work together on this intricate scientific problems with admirable coherence and attitude, it was always felt that there should be a comprehensive facility to explore in detail the emanating challenges of consciousness research studies. In view of this, ministry of Health and family welfare, Govt.of India sanctioned this multidisciplinary Center for Consciousness studies at NIMHANS and to explore in detail the relation between brain, mind, self and consciousness along illness to wellness spectrum.